Brains… Must have brains…

Posted by Michael on November 16, 2014
Posted in: Rum-based. Tagged: tiki. Leave a comment

Even here in this happy oasis of a cocktail blog, one cannot completely escape the inexorable march of time. So, hopefully one of these will ease your forgiving this belated homage to All Hallows’ Eve.  We decided what better way to celebrate Día de Muertos than by appeasing some of the Tiki gods and summoning a couple of zombies. 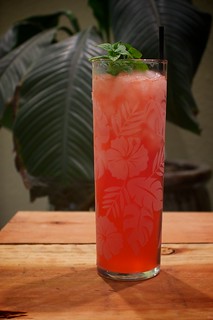 And when one needs to summon Zombies, there is no better source than the high priest of Tiki, Jeff “Beachbum” Berry and his Tiki missal, Beachbum Bery Remixed. The cool thing about this version is that is has the “original” version of Donn the Beachcomber’s Zombie circa 1934.  This recipe was apparently such a closely guarded secret that Don Beach used to encode it so his employees couldn’t sell it to his rivals.  The decryption of this recipe required Heruclean persistence on the part of the part of the Bum and is the subject of chapter 6 in his Sippin’ Safari.  Here at CocktailsWithM, take a far more laid back approach and are entirely willing to allow him to do the heavy Tiki lifting.

One thing is clear, this is a seriously convoluted and involved recipe.  Don Beach must have spent considerable time concocting this recipe.  I personally don’t know how things were at the height of the Tiki frenzy,  but I can’t imagine too many Tiki bars being willing to go the to effort of cost of copying the genuine Beachcomber Zombie.  What’s less clear to me is whether it’s called a Zombie because a couple of these turn you into a zombie or because they will pickle your brain so thoroughly zombies would no longer be interested.   Either way, you’ve been warned.

Give all the ingredients (add the ice last) to a blender and give it a few seconds (not making a smoothie here). Transfer to a Collins glass and top up with more crushed ice. Garnish with a sprig of mint.

And now for “Don’s Mix”… Add two sticks of cinnamon to 1/2 cup of sugar and 1/2 cup of water.  Bring to a boil and simmer for a couple of minutes.  Let cool for more than an hour.  Strain.   Now add 2 parts grapefruit juice (ideally white) and 1 part of the cinnamon simple syrup.  Yah, the recipe is this nuts.

After all this, B felt it was a bit “mediciney” it was so potent, so your bartender wound up finishing two.  To top it all off, it was sprinkling and the Tiki pumpkin only greeted one trick-or-treater (and that one had long past the cute stage).  Still, once you reach that stage of “undead”, it’s hard to get too worked up. 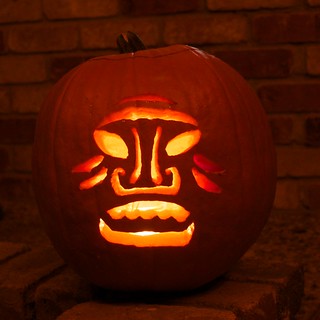