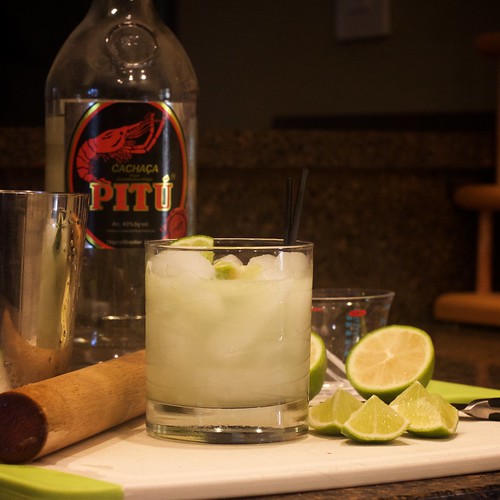 Labor Day has decide to turn up the heat here and I decided something need to be done (and hopefully in a way that would result in a post).  I to thinking about who does heat and holidays better than anyway and I immediately thought of Brazil, which in turn caused me to think our friend Karen who has spent more time there than was probably good for Brazil, but hey, it’s a big country.  She was the one who taught me how to make and pronounce the “National Drink of Brazil” (sorry, I am pretty sure you can’t write about it without saying that at least once.  I think there’s a governing board or something).  Anyway, this is one of those incredibly simple drinks that reminds you of the magic of a good cocktail.  At the core is Cachaça. It’s Brazil’s version of rum and is a bit like light rum meets clear tequila.   It definitely has a funkier more herbal note due to being made from sugarcane juice rather than molasses.  It’s also a different way of putting a drink together in that you muddle and shake but then don’t strain.

Muddle the lime chunks and sugar.  Add the Cachaça and ice.  Shake the cocktail and pour directly into a rocks glass.  A couple of small straws work well as a garnish.

This is one of those festive refreshing drinks that are really fun to make and to drink.  I think it’s definitely found a spot in our regular rotation.

*Superfine sugar is made by running a cup or so of regular sugar through your food processor until it becomes much finer and easier to dissolve, say a minute-ish. 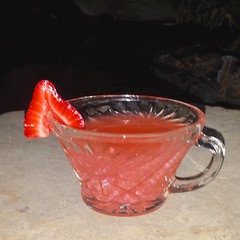 Summer is the season for festive and refreshing (if slightly frivolous) imbibing with great friends.  I originally made this frivolously festive tipple a couple years back for the adherents of the Bacchic Villa after finding the recipe in an issue of Imbibe Magazine.  Apparently this marvelous potation is the creation of one Joy Richard, a member of some standing of an even more fantastic society, LUPEC (Ladies United for the Preservation of Endangered Cocktails).

Unfortunately, when I made it, I was in no fit state to take a picture of the creation for the blog, so it fell last weekend to two of the four high priestesses of the Bacchic Villa, Chelsea and Amy, to pick up the slack and take over it’s preparation.  Their efforts were sufficiently successful, that I wound up only remembering to take a picture after dark, but at least it’s recorded.  I can also add, that should LUPEC be in search of subscribers for a west coast branch of their society, they could hardy do better than Chelsea, Amy, Brenda and Briana (the hostess for our festivities).

So without further ado…

Make the strawberry syrup in advance by quartering a cup of strawberries.  Bring 1 c. of sugar and 1 cup of water to a boil.  Pour the boiling syrup over the strawberries.  Let stand about six hours.  Strain out the berries and reserve to garnish the drink.

We actually found the simple syrup tended to make the punch run a bit sweet, so we left it out.  If it’s too tart after mixing, you could either add more of the strawberry syrup or the simple syrup at that point.  Also, 6 ounces (instead of 4) of the rye didn’t go amiss either.

This is a great and versatile punch, going equally well with summer or winter holiday entertaining.

Owing to a concatenation of circumstances, I now realize that I haven’t had a new post in far too long.  Those same circumstances are now compelling me to make the first post ever without a post–ironic in light of the fact that I have several drinks photographed but not written up.  This lack of photography, I intend to rectify with expedience.

It’s summer and time for a summer drink.  To my thinking sangria is the quintessential summer social drink–light, refreshing, fun and simple.  It is also more of a genre and a methodology than a recipe (feel free to experiment wildly).  That said, here is what I basically go with…

Add all of the ingredients except seltzer to a large pitcher. Add ice and stir. Top off with seltzer.

Some notes on this sangria recipe…

You’ll shoot your eye out, kid

As promised, this is going to be my second (and final for a while) post of festive, holiday cocktails.  Last time we did Dale Degroff’s Royal Gingersnap.  This time we are going to do one from the December, 2011 issue of Imbibe Magazine called “You’ll Shoot Your Eye Out”.  This one violates several of my rules;  it is a new avant garde “mixologist” invented cocktail and it has an infused ingredient likely to be used in no other drink before going bad.  In it’s favor, it also violates the rule that new avant garde “mixologist” invented cocktails must suck.  We actually decided to give it a whirl because it also contains the Czech liqueur Becherovka, which we just happened to have on the bar (I love screwball liqueurs).  Sufficiently impressed, we decided to make it the cocktail de la soirée for our lab’s Christmas party.

As to the name, “It’s perfect for a cold winter night spent watching a holiday flick, which is exactly what I pictured when I named it after a scene in A Christmas Story.” Mathias Simonis, the drink’s creator and mixologist at Distil in Milwaukee is quoted by way of explanation in the Imbibe article.   A funny story in that vein.  The day after Christmas last year, my wife and I were going to be picking up my sister in Milwaukee and decided we should check out Distil.  Mr. Simonis was even behind the bar that night.  Well, a You’ll Shoot Your Eye Out might be the perfect drink on ” cold winter night spent watching a holiday flick [at home]”, but it wasn’t to be had at Distil that night.  He said he didn’t have one of the ingredients; I assume it was the cinnamon syrup because I can’t imagine ever running out of Becherovka once you have a bottle.   Still, be had a nice supper and a couple of great drinks (an Old Fashion and a Pegu Club-B got the short straw and had to drive).  So, if you find yourself in Milwaukee, I’d definitely suggest checking out Distil.

You’ll Shoot Your Eye Out

Combine all the ingredients with ice and stir well.  Strain into a cocktail glass and garnish with an orange twist.

This drink’s sweet cinnamon and orange flavors are successfully counterbalance by a lot of other complex herbal flavors from Becherovka, Benedictine and bitters.   Everyone at the party said they like it, and since there glasses were empty, I think we can take them at their word.  So for festive holiday drink, You’ll Shoot Your Eye Out is a crowd pleaser.

PS.  The picture in the background is on of my brother-in-law, Thomas‘s that he gave to B for her birthday in November.  Thanks.

Tonight is one of those great summer evenings. There’s a cool breeze blowing in off the Sacramento River delta. The blackberries in the sorbet are at their sweetest. The perfect cocktail to round out this evening, a Kir Royale.  The first time I ran across this drink was a tweet from Imbibe.  A little help from Google and I found a video of Robert Hess (of Drinkboy.com and Cocktail Spirit fame) making the drink. Apparently it is a popular apartif to have before dinner in Paris.

It’s a simple cocktail to make.  Just pour champagne in a champagne flute.  Add 1/2 oz of creme de cassis (a black current liqueur, though I have seen creme de mure, a black berry liqueur use instead).  The original photo I saw suggested dropping a blackberry in as a garnish, though I noticed Robert Hess used a generous curl of lemon instead.

It’s a nice refreshing, slightly sweet and fruity drink for a summer evening.  The slight hint of the creme de cassis really worked with the blackberry sorbet.  If you want it to be even  sweeter substitute an Italian prosecco for the champagne, though I personally think that this would be too sweet for my taste.