My father-in-law, one of the pioneers out Riding the Beer Trail in Oskosh, has a pretty hard and fast rule that a cocktail can’t have more than three ingredients.  A bit Spartan, but I catch his point.  Part of the gestalt  of a great cocktail is the way a few ingredients harmonize to become something more than the individual ingredients.  The cocktail resurgence of the last decade ahs been great (we can now find spirits and ingredients that were hard or impossible to find before like rye, créme Yvette or orange bitters). But there’s also been a downside, like birthday cake-infused vodka and, deplorably, flavored whiskey.  And with the trend for fresh ingredients, bartenders became gourmet molecular mixologists using a dizzying bevy of almost absurd syrups, infusions and esoteric bitters.  The results are frequently drinks that a good, but lack that alchemical magic of a classic cocktail.  In response, the May/June 2013 issue of Imbibe magazine featured a challenge to some great bartenders to make a cocktail with only four ingredients.  B & I were intrigued and decided to try them all.  We were impressed.  Each managed to the extremely challenging task making a cocktail that is enjoyable (a mxiture of tasty, balanced and complex), but also distinctive.  With over a century of cocktail mixing, its hard to combine just a few ingredients that result in something new.  If you replace the vermouth in a Negroni with Punt e mes or the Campari with Averna, it’s good, but hardly a distinctive new drink.

We enjoyed them enough that we are going to cover them all over the next several posts.  We’ll start with a the High Noon which was developed by Naren Young. In the magazine, he is quoted as saying “It’s often harder to think about what to leave out of a drink than what to put in…”

Combine ingredients in a shaker and fill with ice cubes; shake until chilled, about 10 seconds. Fine-strain into a chilled coupe; garnish with a grapefruit twist.

The pairing of two classic combinations,  that of tequila and triple sec, and of Campari and grapefruit really works well.  The agave flavor or the young blanco tequila

is great in this drink and likely required for the magic.  This is one that has found a fairly regular spot in our rotation.

A margarita by any other name

Posted by Michael on May 25, 2014
Posted in: Tequila-based. Leave a comment 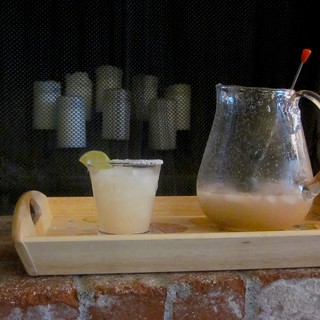 As anyone who’s made my acquaintance will know, I love tequila.  Not that mixto crap that frat boys pour down coeds throats, but the good stuff. The 100% agave azul stuff. Sipped neat, without the lime, without salt.  I love it all, from the young blanco’s with their intense agave flavors to the reposadas and añejos with the mellowing flavors of the barrels they’ve rested in.  For this reason, I have always resisted doing a post on the margarita.  Well, the time has come.  My Beer Trail riding in-laws have come for a visit and the drug cartels have finally loosened up a bit on the price of limes, so I thought it was a good afternoon for a pitcher of magaritas.

I never really thought that margarias were a particularly historic cocktail. I always figured they were a product of the Jimmy buffet-droning, blender-whirring, offensively-named (think about it) fake cantinas that litter the midwest (did I mention that I used to work at one).  Turns out though, I was wrong.  It’s history, like all good cocktails, is shrouded in legend, most of which are demonstrably wrong.  By 1945, a recipe appears in a Jose Cuervo ad, so stories of a socialite inventing it in 1948 are out.  Smithosonian Magazine even devoted some effort to the archeology of the margarita. Their best guess is a bartender named Carlos “Danny” Herrera came up with it in 1938 in his Tijuana restaurant.

The recipe in the 1945 Cuervo ad seems a genuinely solid one:

Shake well with ice and serve in a salt rimmed glass.

Since I also had grapefruit juice, I used the same recipe with Cazadores Blanco tequila (again, never a mixto) and 1/2 oz each of lime and grapefruit juice.  I also added crushed ice to the glass to keep everything nice and cold.  It is a refreshing way to while way an afternoon.

Read more: http://www.smithsonianmag.com/arts-culture/the-history-of-the-margarita-57990212/#esOByp0Ca0tsHfYg.99
Give the gift of Smithsonian magazine for only $12! http://bit.ly/1cGUiGv
Follow us: @SmithsonianMag on Twitter