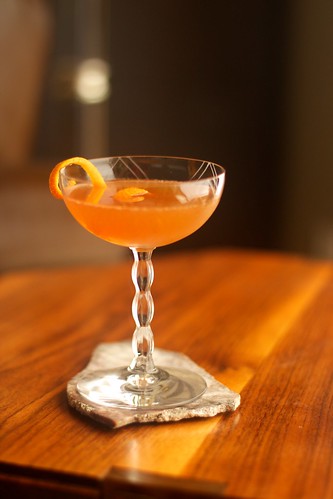 The tax man cometh here at CocktailswithM. And by way of balm to solace our ragged nerves, we have today’s post.

After a bit of digging in to the back story on the Income Tax cocktail, I have to confess to be about as stymied  as I was on Form 8949 of Schedule D.  The recipe we used came from Ted Haigh’s Vintage Spirits and Forgotten Cocktails.  In it, he claims he and a friend of his Richard Corsini did quite a bit of research before identifying this cocktail as the Income Tax.  Originally they called it a “Bronx with Bitters”.  I see where that’s coming from, but the original Bronx Cocktail according the David Wondrich in Esquire Drinks is much more of summer refresher with orange juice and gin and much less of the two vermouths.  Actually almost everyone seems to trace it back to the Bronx, even Drink Boy’s Robert Hess.  In his version, though, there’s a lot less of each vermouth.  I actually found it surprising that no one seems to be commenting it’s also is basically a Satan’s Whiskers without the Grand Marnier and Angostura instead of orange bitters.  Anyway, however it got it’s name, it does seem to numb at least some of the pain…

Shake with ice and strain into a chilled coupe or cocktail glass and garnish with an orange wheel or twist.

It may not be one of our favorites, but it’s certainly worth a taste.  I doe think a visit to the Bronx this summer, though, wouldn’t go amiss.